Major George Tillery
An Unsung Hero
"I was moved to another cell where heat is coming out of the vents and emits some kind of fumes that smell like car gas." "The Window Is Sealed" - Major Tillery
By Nancy Lockhart, M.J. 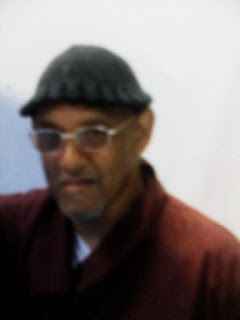 Frackville, Pennsylvania -- Major George Tillery is a Pennsylvania lifer who confronted SCI Mahanoy Superintendent John Kerestes over Mumia Abu-Jamal's deteriorating health. Elder Tillery told the Mahanoy superintendent to get Mumia to the hospital, stating "Mumia is dying." Major Tillery faces acts of retaliation daily as a result of seeking medical assistance for Mumia and others. Tillery has been transferred to SCI Frackville, placed in "the hole" (RHU), on false charges of receiving a letter with stamps concealing drugs. Stamps are taken off of mail at this institution before being distributed to inmates.

Tillery turns 65 years old on September 5, 2015 and has been denied medication needed for his failing liver, high blood pressure and a rash which continues worsen. SCI Frackville has denied him medication and legal phone calls. Tillery continues to suffer because he chose to perform the duties of a humanitarian.

According to Tillery's attorney, Rachel H. Wolkenstein, ..."At SCI Mahanoy and SCI Frackville retaliatory action has been taken against Major Tillery's exercise of constitutionally protected First Amendment rights of access to the courts, filing of grievances relating to medical neglect of himself and others on his cell block and for bringing to the attention of SCI Mahanoy Superintendent John Krestes the grave medical condition of a fellow inmate, Mumia Abu-Jamal, who subsequently went into diabetic shock requiring treatment with an insulin drip in a hospital ICU. "

In a letter to DOC Secretary John Wetzel, Attorney Wolkenstein states that Tillery ..."received a Certificate of Achievement for his Peer Specialist Training in November of 2014 and was assigned to the specialist job of "peer specialist." During the past twelve years he has not had a misconduct – until the retaliatory action taken against him at SCI Frackville on April 30, 2015. He has been working on new legal challenges to his 1985 conviction."

"The most recent and serious retaliatory action occurred on April 30, 2015 at SCI Frackville when Major Tillery was falsely charged with receiving a "letter with positive test result for suboxone." In his 32 years in prison Major Tillery has not had even one misconduct for drugs or dirty urine."

I'd like to reiterate these facts, Major Tillery was retaliated against, moved from SCI Mahanoy and placed in "the hole" at SCI Frackville. He is accused of receiving a letter which tested positive for suboxone under a stamp. All stamps are removed from mail entering this institution. He has been denied adequate medical care, the rash on his body is getting worse and heat mixed with vapors that smell like gas is being pumped through the vent while the one window in his cell is sealed.

From the pen of an unsung hero,

In The Name Of Allah
The Merciful
Peace.

..."I'm still in The Hole waiting to see what the D.O.C. Will do with The evidence they were presented with about how i was set up by Staff at S.C.I. Frackville. ...I was move to another cell where the vent emits some kind of fumes that smell like car gas.

"And There's no cold water to drink. ...while at S.C.I. Mahanoy I was threaten by my unit manager Griffin stated if i kept complaining about Mumia or writing Grievances, she would Try and have me desinated a Muslim combatant." "... I have a Metal Food slot which the guards put a toilet brush on my food slot so i won't eat. They know on Ramadan you only get one meal. This happens twice a week. Plus my rash the same one Mumia had is getting worst. "

Tillery filed Grievance# 567683 On February 26, 2015 and it was denied. The grievance response focuses mainly on the toilet brush. Tillery has made clear the response is an untruth, that there is no disinfectant and the toilet brush is used by hundreds of cells. It is inhumane that the prison would place this toilet brush right above the slot which his plate slides through.

Among all other retaliatory practices "The D.O.C. Has started up their old smear campaign telling people I was a leader in The Black Mafia. Which is a lie. I was a member in the nation of Islam in the 60's and 70's which is well documented. ... Peace, Major."

... I was placed in a cell with the windows sealed. And hot air out of the vent. Yes I'm still in The Hole. I will never give up the fight for prisoners. I still have the rash and yes the fumes are still strong in the heat. ...They still have not given me my orthopedic boots back. So my hip which is degenerate is getting worse." He goes on to state – "They know that I have respiratory problems and even the young prisoners have fallen out due to the sealed windows and hot air with fumes out of the vent.

You can assist Major George Tillery by contacting the individuals below.

Contact DOC John E. Wetzel's Secretary: (717) 728-4109 Ask her to take a message for DOC Secretary John Wetzel. Explain that Major Tillery languishes in a prison cell with sealed windows and hot air with fumes coming out of the vent. Also explain that he suffers medical neglect. Last, request that Major Tillery is taken back to SCI Mahanoy and placed in general population.

Contact PA Gov. Tom Wolf: 717-787-2500 and by e-mail at: governor@pa.gov Explain that Major Tillery languishes in a prison cell with heated fumes coming through the vent. The Window is Sealed. He suffers medical neglect. His treatment is a violation of human rights. It is unethical and inhumane.

Contact Theron Perez, Chief Counsel Pennsylvania Department of Corrections: 717 – 728-7763
Ask the secretary to accept a message for Chief Counsel Theron Perez. Explain that elder Major Tillery faces retaliation in the forms of medical neglect and torture. Further explain that Elder Tillery was moved to a cell where heat and toxic fumes are pumped from the vent. Request that he is moved back to SCI Mahanoy into general population.

_____________________
About The Author
I've publicized many cases, spearheaded campaigns and completed strategical determinations with positive measurable results. Imam Jamil Al-Amin,Willie Manning and Marissa Alexander are among a few. Global support grew for Imam Jamil Al-Amin's medical treatment and transfer, a stay of execution for Willie Manning, and a team of pro bono attorneys for Marissa Alexander. I hold a Master of Jurisprudence from Loyola University Chicago School of Law, a Certificate of Technology and Writing from Bread Loaf School Of English – Vermont and a B.A. Degree From Clark Atlanta University. Please visit www.NancyLockhart.net and donate "Help Me To Expand Assistance To Victims Of Injustices." http://gogetfunding.com/help-me-to-assist-victims-of-injustice/